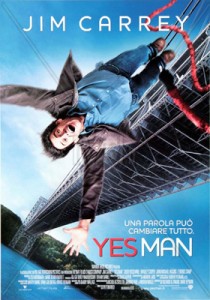 Bank loan officer Carl Allen has become withdrawn since his divorce from ex-wife Stephanie. Routinely ignoring his friends Pete and Rooney, he has an increasingly negative outlook on his life.

One day, an old colleague suggests that he goes to a “Yes!” seminar with him, which encourages its attendants to seize the opportunity to say “Yes!”. Carl considers the option, but subsequently misses Pete’s engagement party. An irate Pete turns up at his house and berates him, telling him that he will end up completely lonely if he does not change his life. Carl decides to attend the seminar and meets inspirational guru Terrence Bundley, who publicly browbeats him into making a covenant with himself. Carl reluctantly promises to stop being a “No Man” and vows to answer “Yes!” to every opportunity, request or invitation that presents itself thereafter….