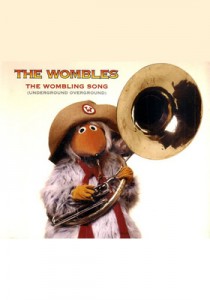 The Wombles are fictional pointy-nosed, furry creatures that live in burrows, where they aim to help the environment by collecting and recycling rubbish in creative ways. Wombles were created by author Elisabeth Beresford, and originally appeared in a series of children’s novels from 1968. Although Wombles supposedly live in every country in the world, Beresford’s stories are concerned with the lives of the inhabitants of the burrow on Wimbledon Common in London, England.