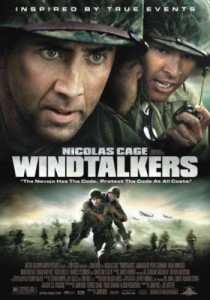 During World War II, Cpl. Joe Enders rallies to return to active duty with the aid of his pharmacist, Rita, after previously surviving a gruesome battle against the Imperial Japanese Army that killed his entire squad and left him almost deaf from a Japanese grenade explosion. Enders’ new assignment is to protect Navajo code talker Pvt. Ben Yahzee, which earns him the rank of sergeant. Sgt. Ox Anderson also receives a parallel assignment protecting Navajo code talker Pvt. Charlie Whitehorse. The Navajo code, as it was known, was a code based on two parts: 1) the Navajo language (notoriously difficult to learn or to understand); and 2) a code embedded in the language, meaning that even native speakers would be confused by it. Supposedly, this code was close to unbreakable, but so difficult only a few people could actually learn it.