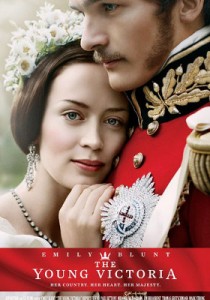 Princess Victoria of Kent is the heiress presumptive to the throne during the last years of the reign of her uncle King William IV. She is brought up under a strict set of rules devised by her mother (her father having died when Victoria was a baby), the Duchess of Kent and comptroller of the Duchess’s household, Sir John Conroy, who calls it the “Kensington System.” Conroy hopes that William IV will die while Victoria is still a minor, thus the Duchess would be appointed Regent, and he would be the power behind the throne through his considerable control of the Duchess. Victoria grows rebellious and resentful of her mother and Conroy’s oppressive control of her every move. During an illness, her mother and Conroy attempt to force Victoria to sign papers that would make Conroy her personal secretary upon her majority. Although weak and ill, Victoria is strong enough to vehemently refuse this ploy, throwing the papers on the floor.

COMPROMESSI SPOSI is a 2018 Italian feature directed by Francesco Miccichè.

Ettore Ranieri, famous writer and guru of the analogical world, decides to spend a few days with the family in his chalet in the mountains to celebrate his birthday. However, instead of enjoying this time together, everyone is always on its digital devices checking apps and emails. When the group suddenly loses their internet connection,…

Wrongfully convicted for murder, Henri Charriere forms an unlikely relationship with fellow inmate and quirky convicted counterfeiter Louis Dega, in an attempt to escape from the notorious penal colony on Devil’s Island.

The Mercy is a 2017 British biographical drama film, directed by James Marsh and written by Scott Z. Burns. It is based on the true story of the disastrous attempt by the amateur sailor Donald Crowhurst to complete the Sunday Times Golden Globe Race in 1968 and his subsequent attempts to cover up his failure.…