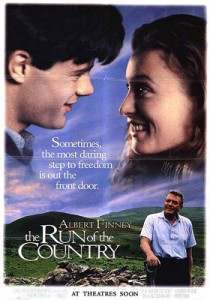 The Run of the Country tells of a political and generational conflict in a teen romance and coming-of-age story in Ireland.

Albert Finney stars as a policeman in a small County Cavan village just south of the border between Northern Ireland and the Republic . The sergeant, with nothing to do, hopes for just one murder to solve and make himself famous. His real concern, however, is that his relationship with his 18-year-old son Danny (Matt Keeslar) has been strained since the recent death of his wife from a heart attack during a domestic quarrel.