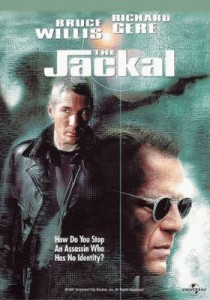 A joint mission of the American FBI and the Russian MVD leads to the death of the younger brother of an Azerbaijani mobster (David Hayman). In retaliation, the mobster hires an enigmatic assassin known only by the pseudonym “The Jackal” (Willis) to kill an unseen target. Meanwhile, the MVD capture one of the mobster’s henchmen.

During interrogation by torture, the henchman reveals the name “Jackal.”

This coupled with the documents recovered from the henchman’s briefcase lead the FBI and MVD to assume the target for the retaliatory hit is FBI Director Donald Brown (John Cunningham).