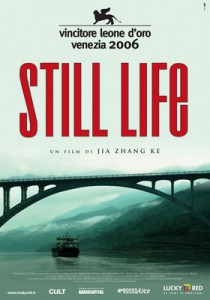 Still Life is set in Fengjie, a city upstream of the massive Three Gorges Dam. Now marked for flooding, the city undergoes a process of self-deconstruction. Into this dying town comes Han Sanming, a coal-miner from the province of Shanxi who has returned in search of a wife who ran away sixteen years ago. Upon arriving, he asks a local motorcyclist to drive him to his former address on “Granite Street.” The driver takes him to the river bank, revealing that his entire neighborhood has been flooded since the building of the dam. After a failed attempt to obtain his wife’s information from the local municipal office, Han Sanming settles into a local hotel. Sanming’s next stop is a rickety boat owned by his wife’s elder brother. The brother informs Sanming that his wife and daughter (the real reason for his return) work downriver in Yichang but that if he remains in the city, they will eventually return.