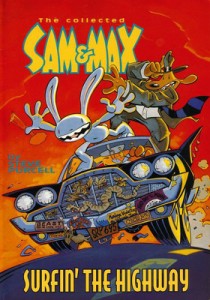 This is an American animated television series starring Sam & Max, a duo of private investigators composed of Sam, an anthropomorphic dog, and Max, a lagomorph or “hyperkinetic rabbity-thing.”

The series revolves around the freelance police accepting missions from the mysterious Commissioner, whom they have never seen.

The assignments usually lead them into far-off and exotic locales such as the Moon, Mount Olympus, the center of the Earth or the mutant inhabited waters of Bohunk Lagoon. In between these assignments, the pair also manage to squeeze in fridge-spelunking, time-travelling, Bigfoot-hunting and numerous other escapades. There were also holiday themed episodes.