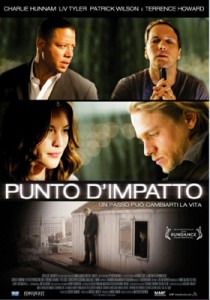 Being a movie that mix genres, The Ledge is part psychological drama, part philosophy debate, part thriller, and part love-story.

The movie opens with detective Hollis Lucetti (Terrence Howard) receiving the news from a doctor that he has been sterile his entire life. Upon reaching home, he questions his wife about who their children’s father is. The film quickly switches to Gavin Nichols (Charlie Hunnam), an atheist, standing on a ledge as if to jump to his death. A small crowd forms below Gavin, and Hollis responds to the emergency. At first it looks like a regular suicide attempt. It is quickly revealed to be more complex than that, as Gavin explains to Hollis that he has no other choice than to jump, or somebody else will die ..