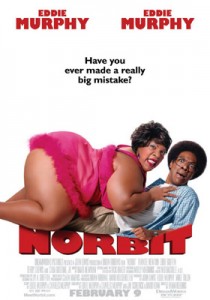 Norbit Albert Rice (Eddie Murphy) opens the film by narrating that he is an orphan as he is thrown out of a car by his parents, in front of the Golden Wonton orphanage and cuisine. Mr. Wong (Murphy) finds him the next morning and takes him in, claiming that nobody will want “ugly black one”. Norbit and his buddy partner, Kate Thomas (Thandie Newton) were the best of friends and even got ‘married’ as children in the orphanage but one day, they got separated when Kate got adopted.

As there was an odd number at the orphanage, Norbit was alone for a while. A while after, whilst being bullied by twins in elementary school, Norbit is saved by Rasputia Latimore (Murphy), a fat, self-centered, overbearing, vain girl who takes an instant liking to Norbit and makes him her boyfriend….