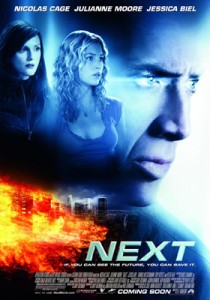 Cris Johnson (Nicolas Cage) can see into his future. He can only see two minutes ahead, with the exception of a vision he once had of a woman walking into a diner. Because there are no details other than the time, he goes to the diner twice each day at 8:09, to await her arrival. He works as a small-time magician in Las Vegas, where he supplements his income with gambling, using his powers to win against the house. He draws the attention of FBI agent Callie Ferris (Julianne Moore), who has figured out his ability and wants to stop terrorists from detonating a nuclear weapon. Before Ferris can approach Cris, however, his gambling draws the attention of casino security. On his way out of the casino, he stops an imminent robbery, yet is chased by security agents. Using his ability to forecast the actions of his pursuers, he eludes both of them and Las Vegas police. Ferris tracks Cris to his home, but he escapes after foreseeing her arrival..