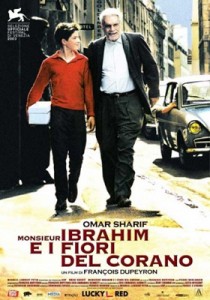 The film begins in a working-class neighborhood in the Paris of the 1960s. The main character, ”Moїse Schmidt” (Momo), is a young Jewish boy growing up without a mother and with a father afflicted by crippling depression.

Momo is fascinated by the elderly Turkish Muslim man, Ibrahim Demirci, who runs a grocery store across the street from his apartment (where Momo often shoplifts). Their relationship develops and soon Momo feels closer to Ibrahim than to his father.

Ibrahim calls Moїse Momo, and adopts him when his father leaves and commits suicide. Momo and Ibrahim go on a journey to Turkey, Ibrahim’s homeland, in their new car where Momo learns about Ibrahim’s culture and later converts to Islam. Ibrahim is killed in a car crash and Momo returns to Paris to take over the shop.