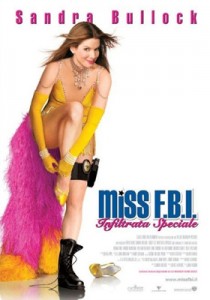 Three weeks after the events of the first film, FBI agent Gracie Hart (Sandra Bullock) has become a celebrity after she infiltrated a beauty pageant on her last assignment. Her fame results in her cover being blown while she is trying to prevent a bank heist.

To capitalize on the publicity, the FBI decide to make Gracie the new “face” of the FBI; Gracie, who is hurt after being dumped by her boyfriend, fellow Agent Eric Matthews (who is relocated to Miami in the movie), agrees to the reassignment. The movie flashes forwards ten months, and she begins appearing on morning television giving out fashion advice and promoting her book.