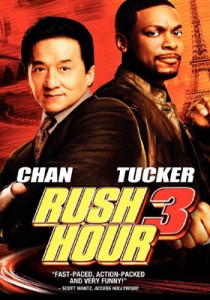 Carter (Tucker) is directing traffic. Concurrently, Chinese Ambassador Han addresses the importance of fighting the Triads at the World Criminal Court, announcing that he may know the whereabouts of Shy Shen, a semi-mythical individual of great importance to the Triads. Before announcing, an assassin shoots and Han takes a bullet in the shoulder, disrupting the conference. Chief Inspector Lee (Chan) pursues the shooter and corners him, discovering that the assassin is his Japanese foster brother Kenji (Sanada). When Lee hesitates to shoot Kenji, he makes his escape.

In the hospital, Lee learns that Han will make a full recovery. Han’s daughter, Soo-Yung (Zhang), now grown up, arrives and makes Lee and Carter promise to capture the one behind the shooting. She then informs Lee and Carter that her father gave her an envelope which contains important information regarding the Triads, and that the envelope is in her locker at the martial arts studio where she teaches. Lee and Carter make their way to the studio, but find out that a gang of armed men have already arrived and emptied it. The duo are then told by the Master of the studio that Soo-Yung and Han are in danger, and rush back to the hospital.

Once the two reach the hospital, a gang of assassins arrive to kill Soo-Yung and Han. Lee and Carter manage to defeat them. They interrogate the leader of the assassins but find that he only speaks French. A nun, Sister Agnes (Dana Ivey), who can speak French, translates for them and Carter and Lee find out that they are marked for death by the Triad along with Soo-Yung and Han. For her protection, they take Soo-Yung to the French Embassy and leave her under the care of Reynard (Max von Sydow), the French ambassador and the chairman of the World Criminal Court. When a car bomb nearly kills Reynard and Soo-Yung the duo decides to go to Paris to investigate.

In Paris, after getting a painful cavity search from Parisian commissioner Revi (Roman Polanski), Lee and Carter meet up with George, a taxi driver (Yvan Attal), who is prejudiced against Americans. He drives them to a Triad hideout. Once there, Lee got tricked into following a Triad assassin named Jasmine (Kudoh) because she told Lee she can “give him what he needs”. while Carter meets a beautiful woman whose name is not disclosed (Lenoir). Lee and Carter tried to escape but were captured by Kenji’s men and Carter finds out who Kenji was. Reynard later tells Lee that Shy Shen is not a person, but a list of the Triad leaders and reveals that Han’s informant knows where to find it. The informant turns out to be Geneviève, the woman Carter met at the gentleman’s club.

Image:RushHour3CarChase.JPG|thumb|left|Chris Tucker and Jackie Chan during the car chase scene from ”Rush Hour 3.”

After the two locate Geneviève, they save her from an assassination attempt by the Triads and flee to their hotel room. Privately, Carter tries to interrogate Genviève but they find themselves falling in love with each other. They attempt to make love but they are attacked again by Jasmine. No longer safe at the hotel, they decide to hide out with George, who now has developed a great appreciation for the United States, and decides to help them solve the case. Lee and Carter learn that Geneviève not only knows where the list is, but that she ”is” the list. The names of the thirteen Triad leaders have been tattooed on the back of her head, as per tradition, and Geneviève explains that she will be decapitated and buried if the Triads capture her. When Lee and Carter bring Geneviève to Reynard, he accidentally reveals that he has been working with the Triads all along. Kenji calls and informs Lee that he has captured Soo-Yung and that he would like to exchange her for Geneviève.

Lee arrives at the exchange point, the Jules Verne Restaurant in the Eiffel Tower, with Carter disguised as Geneviève. Kenji challenges Lee to a sword fight, during which the two fall off the tower and get caught in a safety net. Kenji’s sword cuts the safety net open and it collapses, leaving both men hanging on for dear life. Lee grabs Kenji’s arm, intending to save his life. Kenji says his final goodbye to Lee and willingly lets go of him as he falls to his death, saving Lee’s life. Lee then manages to climb up to safety. Meanwhile, Carter saves Soo-Yung and defeats Jasmine who gets stuck between a large wheel and is split in half (off camera).

As Carter and Lee send Soo-Yung down the elevator to safety, they make their escape from the Triads by gliding down to safety with a large French flag. Unfortunately, they are confronted by Reynard, holding Geneviève hostage and threatening to kill her and frame them. However, George, having followed Lee and Carter, shoots Reynard from behind. The police arrive, with Commissioner Revi gloating and trying to get undeserved credit. After giving him a team punch to the face, Lee and Carter leave the scene dancing to the Edwin Starr song “War”.