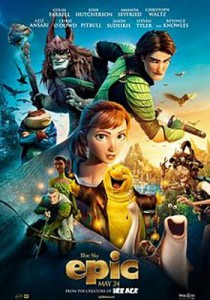 Following the death of her mother, Mary Katherine (a.k.a. M.K.) (Amanda Seyfried), a 17 year old teenager, moves in with her estranged and eccentric scientist father, Professor Bomba (Jason Sudeikis), who has been searching for tiny human soldiers, about which M.K. is skeptical. She wants her father to stop his work. Unknown to the both of them, Bomba is right that there are tiny soldiers called Leafmen. They protect the forest Bomba lives near from evil creatures called Boggans (who shoot arrows that can kill any living thing) and their malevolent leader Mandrake (Christoph Waltz) who plans to destroy the forest. An independent young soldier, Nod (Josh Hutcherson) decides to quit, much to the ire of the no-nonsense Leafmen leader Ronin (Colin Farrell) who wants Nod to learn about teamwork.