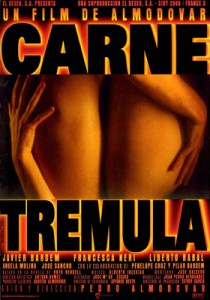 Madrid, Christmas 1970: with the nation under a state of emergency ordered by the Franco regime, a young prostitute, Isabel Plaza Caballero (Penélope Cruz), gives birth on a bus to a son she names Victor.

Twenty years later, Victor Plaza (Liberto Rabal) shows up for a date he made with Elena (Francesca Neri), a junkie with whom he had sex a week earlier.

Waiting for her dealer to arrive, Elena is not interested in seeing Victor and tells him to leave. Finally she gets a gun and orders him out of the flat. Enraged, Victor wrestles the gun from her; in the process Elena gets knocked out, and the gun goes off.

A neighbor hears the shot and calls the police…