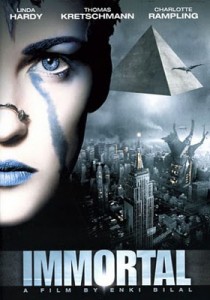 The film takes place in New York City in the year 2095 where genetically altered humans live side by side with unaltered men and women, and where Central Park has been mysteriously encased in an “intrusion zone” where people who attempt to enter are instantly killed.

A strange pyramid has appeared over the city; inside, the gods of ancient Egypt have judged Horus, one of their fellow gods, to cease his immortality.

In the city below, Jill, a young woman with blue hair is arrested. Not completely human, her tissues appear to be no more than a few months old according to an examining physician, although her physical form is already that of an adult. She also possesses a number of secret powers, including one that enables her to procreate with gods, though she knows nothing of this….