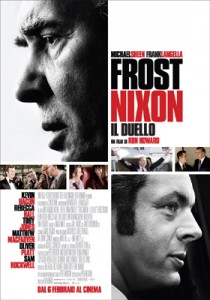 A series of news reports document the role of Richard Nixon in the 1972 Watergate scandal, prior to his 1974 resignation speech. Meanwhile, David Frost has finished recording an episode of his talk show in Australia and watches on television as Nixon leaves the White House.

A few weeks later in the London Weekend Television (LWT) central office, Frost discusses the possibility of an interview with his producer and friend, John Birt. When Frost mentions Nixon as the subject, Birt doubts that Nixon will be willing to talk to Frost. Frost then tells Birt that 400 million people watched President Nixon’s resignation on live television.

Nixon is recovering from phlebitis at La Casa Pacifica in San Clemente, California. He is discussing his memoirs when his literary agent, Irving “Swifty” Lazar, arrives to inform the former president of a request by Frost to interview him….