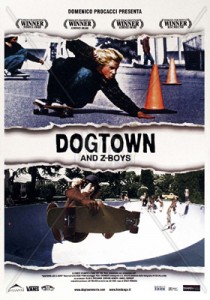 Dogtown and Z-Boys is a 2001 documentary film directed by Stacy Peralta. Using a mix of film the Zephyr skateboard team shot in the 1970s by Craig Stecyk and more recent interviews, the documentary tells the story of a group of teenage surfer/skateboarders and their influence on the history of Skateboarding (and to a lesser extent surfing) culture. The film is narrated by Sean Penn.