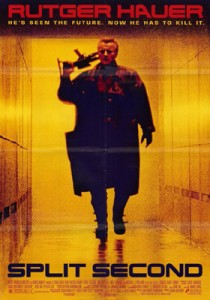 In the year 2008, extensive rainfall has caused large areas of London to be under a foot or more of water. Rookie police officer Dick Durkin (Duncan) is assigned to partner Harley Stone (Hauer), a burnt-out and highly cynical homicide detective.

After investigating the scenes of several killings, they appear no closer to identifying the killer, with their only clues being that the murders seem to be linked to the lunar cycle, and that the killer has multiple recombinant DNA strands, having absorbed the DNA of seemingly anything he kills.

After a tense battle in and around an abandoned Tube Train, Stone is able to pull the monster’s heart from its chest and kill it.