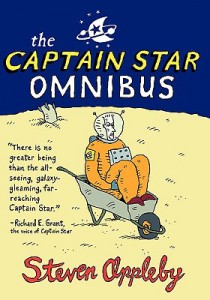 The story of Captain Star take place on a rocket ship, “The Boiling Hell”, which has been ordered to a deserted planet known only as “The Nameless Planet” at the Ragged Edge of the Universe.

The ship’s crew consists of the egocentric and often paranoid Captain Star, Dana Scully-esque science officer Scarlette, nine-headed engineer Jones, and fish-keeping Navigator Black. They are later joined by a robot, Jim-Bob-Bob, who performs laundry duty and various other servitudes.

Captain Star is introduced in the opening theme as “the greatest hero any world has ever known”. A legendary explorer who has hundreds of planets named after him,