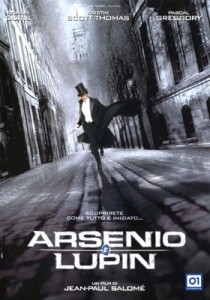 The film follows gentleman thief Arsène Lupin from a small boy, through the death of his father, and his later years when he meets the strange woman, Joséphine, who appears to be immortal and uses a hypnotic drug to enslave people to her will. Arsène’s ethos is to steal from the rich and deserving crooks. In this film he comes up against two parties, a secret society and Joséphine, who are intent on gathering three crucifixes which will reveal the secret of a lost treasure.

The film refers to many of the Maurice Leblanc’s Arsène Lupin stories, including “The Arrest of Arsène Lupin”, “The Queen’s Necklace”, “Sherlock Holmes Arrives Too Late”, ”813”, and ”The Countess Of Cagliostro”. Some of these references are more direct and complete than others.