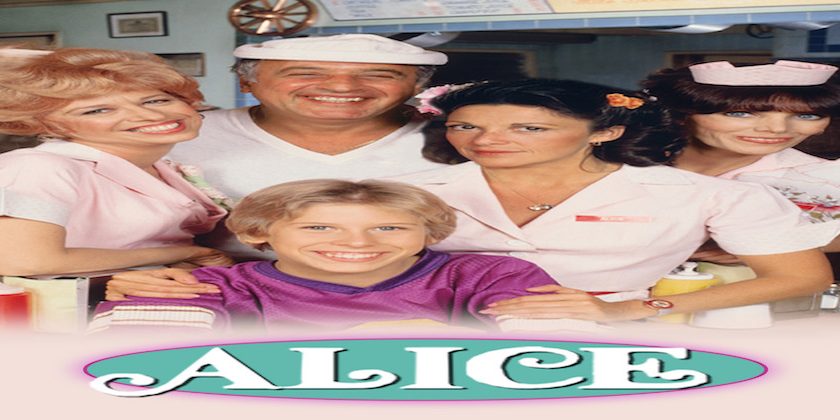 Alice is an American television sitcom that ran from August 31, 1976 to March 19, 1985 on CBS. The series is based on the 1974 film Alice Doesn’t Live Here Anymore. The show stars Linda Lavin in the title role, a widow who moves with her young son to start life over again, and finds a job working at a roadside diner in a suburb of Phoenix, Arizona. Most of the episodes revolve around events at Mel’s Diner, where Alice is employed.

Alice Hyatt (Lavin) is an unemployed widow after her husband, Donald, is killed in a trucking accident, and with her young son Tommy (played by Alfred Lutter in the pilot episode, reprising his role from the movie, but played by Philip McKeon thereafter) heads from their New Jersey home to Los Angeles so that she can pursue a singing career. Her car breaks down on the way in Phoenix (from a presumed engine fire, as seen in the opening credits), and we meet her soon after she has taken a job as a waitress at Mel’s Diner, on the outskirts of Phoenix. (The later seasons’ exterior shots were of a real diner, named Mel’s, still in operation in Phoenix.) Alice works alongside Mel Sharples (Vic Tayback), the grouchy, stingy owner and cook of the greasy spoon, and fellow waitresses and friends, sassy, man-hungry Florence Jean “Flo” Castleberry (Polly Holliday), and neurotic, scatterbrained Vera Louise Gorman (Beth Howland).

Each episode invariably started inside the diner, and most if not all subsequent scenes took place there as well. A frequent set for non-diner scenes was Alice’s one-bedroom apartment in the Desert Sun apartments. (Tommy used the bedroom and Alice slept on a sleeper sofa in the living room.) Vera and Mel’s studio apartments and Flo’s trailer were occasionally seen. One of the diner’s biggest competitors, Barney’s Burger Barn,Vinnie’s House of Veal was sometimes mentioned.

The diner had its share of regular customers through the years, such as Tommy’s basketball coach, Earl Hicks (Dave Madden), and Henry Beesmeyer (Marvin Kaplan), a telephone repairman who always made jokes about Mel’s cooking. Henry’s oft-mentioned wife Chloe was seen in one episode, played by Ruth Buzzi. Celebrities playing either themselves or other characters (including Martha Raye, George Burns, Robert Goulet, Desi Arnaz, and Jerry Reed) were a hallmark of the show.

Polly Holliday left the show to star in her own spin-off series, Flo.[2] In the episode airing February 24, 1980, Flo leaves to take a hostess job in Houston. On the way to Houston, Flo stops at her hometown Fort Worth, Texas (which she refers to by its moniker “Cowtown”). Flo decides to buy and run a failing roadhouse bar there, which she renames Flo’s Yellow Rose. Polly Holliday never made a guest appearance on Alice after beginning Flo, although flashbacks including Flo were shown in the final episode of Alice. Vic Tayback made one guest appearance on Flo.

Diane Ladd, who received an Academy Award nomination for her portrayal of Flo in the film version[3] joined the cast in 1980 as Isabelle “Belle” Dupree, a hard-edged but kind-hearted woman. She had been a waitress of Mel’s in the past, and the two had had a romantic relationship during that time. In spite of Ladd’s Golden Globe-winning performance as Belle,[3] the character was not retained for the duration of the series and was replaced early in 1981, the character making one last appearance in which she telephones the diner to inform everyone that she had taken a job as a backup singer in Nashville, Tennessee. It has been said that Ladd clashed with her co-stars, and no flashbacks including Belle were shown during the final episode of the series.

Theatre actress Celia Weston then joined the cast as the good-natured, boisterous truck driver Jolene Hunnicutt, who came from Myrtle Point, South Carolina. Jolene arrives as she and her male driving partner are in the midst of an argument over his unwelcome advances, during which she throws and breaks many of Mel’s dishes. Mel agrees to hire her “temporarily” to work off the cost of the dishes, but she stays until the end of the series. Jolene frequently mentions her grandmother, “Granny Gums”, who had only three or four teeth. Jolene also mentions her distant relative Jefferson Davis “Boss” Hogg, a character from the concurrent CBS series The Dukes of Hazzard. In one episode Sorrell Booke guest stars in this role, along with fellow Dukes character, Enos (Sonny Shroyer).

The latter years of the show focused on some character development, such as the hasty courtship and marriage of Vera and lovable cop Elliot (Charles Levin). Tommy eventually goes to college and is seen less frequently. In the final season, the character of Alice was absent several times due to Lavin’s directing a number of episodes and playing the character of Mrs. Walden. The final story arc began in the summer of 1985, when country singer Travis Marsh (played by Lavin’s real-life husband Kip Niven), discovering that he’s falling for Alice, “kidnaps” her to take her to Nashville, telling her it’s time to follow her dream there. Bewildered at the thought of her dreams finally coming true, Alice agrees, but not without extracting a promise from Travis to drive her back to Phoenix so she can get her affairs in order, including ending her current relationship with a writer.

In the series finale, which aired March 19, 1985, typical of sitcoms of the era, news of several life-changing events is revealed within a matter of minutes. Alice, after nine years of trying, finally gets a recording contract and is moving to Nashville with Travis Marsh. Vera announces she is pregnant and decides to be a full-time mother, Elliott having been promoted from officer to detective. Jolene’s “Granny Gums” has died and leaves her granddaughter enough money to open her own beauty parlor in her hometown. Besides all three waitresses suddenly leaving simultaneously, by an amazing coincidence Mel has just sold the diner for a large amount of money to a real estate developer, and must close within days. On closing day, he surprisingly gives each waitress a $5,000 farewell bonus. The remainder of the episode shows flashbacks to humorous and major events, and many of the big stars who had appeared on the show, including Polly Holliday. Finally, while cleaning out her locker, Alice finds the “Waitress Wanted” sign that first drew her to the diner. The series’ regular customers, including Henry,Chuck and Earl say their emotional farewells, followed by Elliot, and finally the principal characters Tommy, Jolene, Vera, and Alice. The last thing we see is Mel putting up the “Closed” sign and locking up. 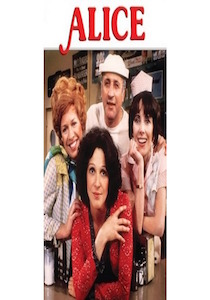