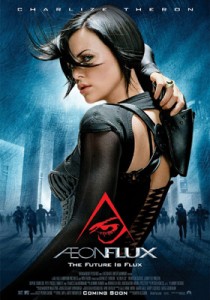 In 2415, after a virus in 2011 wiped out 99% of the Earth’s population, all of the survivors inhabit Bregna, a walled city-state, which is ruled by a congress of scientists. Although Bregna is idyllic, people are routinely disappearing and everyone is suffering from bad dreams. Æon Flux is a member of the ‘Monicans’, an underground rebel organization who communicate through telepathy-enabling technology and are led by The Handler. After a mission to destroy a surveillance station, Æon comes home to find her sister Una has been killed for being mistaken for a Monican. When Æon is sent on a mission to kill the government’s leader, Trevor Goodchild, she discovers that both she and the Monicans are being manipulated by council members in a secret coup.